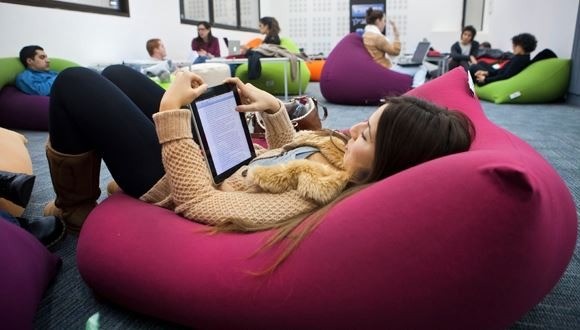 I'll try in this article to explain the change that academic libraries have been experienced in the last decade. At the beginning, the libraries were mostly a huge warehouse for books. The importance of a library has been measured according to the amount of books they held. At the 19 century, the reading rooms were big and tall and everybody had to be quiet. The libraries trademark was the absolute silence. All this changed about 15 years ago.

One of the first comprehensive projects was the renewed Bibliotheca Alexandrina in Egypt, opened in 2002. The most important library in ancient history, who was devastated in a fire in the 1st century AC, decided to emerge from the ashes and rebuild the library in memory of its glory days. The complex included 70,000 square meters in the main library building, a conference center, an antiquities museum, permanent and temporary exhibitions, a library for blind people and a planetarium. This ambitious project marked a beginning of a new era for libraries.

With the flowering of technology, the printed book was almost no more needed, and the magazines and books editorials started to release their digital editions, parallel to the printed ones. With the invention of the laptop, the iPad and the iPhone, the information became available for anyone anytime-anywhere. So, in order to remain relevant, the libraries had to embrace the technology and adapt their selves to the new times.

More and more libraries around the world preferred the digital copy of the books, and this new trend created a large number of free shelves, and eventually, a considered amount of free space, which will be transform in reading rooms or spaces for meeting people and interchange ideas, study together etc.

The first entity that recognized the new direction and needs were the municipalities, that in order to provide more sophisticated services to their citizens, started the design of community centers that combined books with other cultural activities like: auditoriums, exhibitions, study rooms, community radios, cafeterias and restaurants.

The new libraries evolved into a big culture center or a mini shopping mall. Now, you can spend an entire day with your family in a controlled, secured and entertaining space. The most remarkable example is the Salt Lake City Public Library, which was designed by the Israeli architect, Moshe Safdie in 2003. The external shape of the library reminds the Coliseum in Rome, and the inner space is organized around a three floors atrium. A few bridges connect between the two wings and the visitor has a full view of the space, which allows an instant orientation inside the library. At the ground floor, during the week, the atrium can be a nice inner street with little trees, seating tables and book shops. At weekends, the multipurpose atrium can transform into an improvised food market.

So, as you can see, the new library provides almost every service you need and still, you can sit and, if you want, only relax and read a book. From here, the way to change the academic libraries was ready. Following are a few academic libraries designed around the world in the past ten years.

The first one is the Cottbus University Library in Cottbus, Germany. The Cottbus University thought that in order to attract new students, they had to give them a new and modern library. So, they asked from the awarded architects firm Herzog & de Meuron to design a unique building that will become a landmark for the whole area. The result was an ameba shaped building, white and elegant from the outside, and colorful and funny in the inside. In this library you can talk with your friends, study in groups and find your favorite spot, according to what you choose to do at this specific day. The building was finished in 2005.

Another academic library is the new annex for the Amsterdam University Library. This library was design by Roelof Mulder & Ira Koers in 2009. The added value for this library is the circulation room. It's left outside the library doors and its open 24/7. The students can order any book from a computer that brings instantly the book from the underground bookshelves storage to a box in the circulation room, like a mail box. The student receives a card with a number and all he has to do is wait a minute or two, walk a few steps and take the book from the specific box.

This system grabbed momentum and now there are an increasing number of libraries which already use this kind of automatic storage. One of them, is the new John & Rika Mansueto Library at the University of Chicago. This library was design by the Architect Helmut Jhan in 2011. Like the library in Amsterdam, the books are sorted in an automated storage and retrieval system (ASRS) underground. In Chicago, the reading room is located in a glass dome above ground. The books arrive to the main circulation desk and the librarian gives the book to the student. All the tables are equipped with electrical sockets and there is free Wi-Fi available connection to everyone, of course. The design of the room without any partitions, invites the students to communicate and interchange ideas.

This important goal leads us when we start redesign academic libraries in Israel. In 2006, I won a competition to design the first Information Library Center at the Medicine Faculty Library in the Hebrew University of Jerusalem. We interviewed a lot of librarians and students in order to understand the needs and the expectations from the libraries we are going to create.

Most of the requests were to give the students different kind of spaces:

Over the years, we designed at The Hebrew University all the main libraries in each campus.

Since 2010, we are working closely with Tel Aviv University. At the first stage, we prepared a Master plan for the four main libraries. In 2012 we opened the renewed floor of The Brender-Moss Library for Social Sciences and Management, which is a huge success. The last year the number of entries to the library has increased in 150 percent. The renovation promoted a new range of activities including the opening of the library 24/7 during the exam period. The library is a role model for new libraries which want to do a similar change.

This year, we are very proud to open the second renovated library in Tel Aviv University, The Gitter-Smolarz Library of Life, Sciences and Medicine. We have plans for The Neiman Library of Exact Sciences and Engineering and for The Elias Sourasky Central Library.